I somehow heaved the 4×8’s up onto the rafters and got them nailed down. I was going to post the videos from the webcam showing how treacherous that was, but I forgot to suck them off the webcam before they got overwritten. I came awfully close to taking my head clean off a couple of times, and almost fell off the ladder at least four times. But they are up… 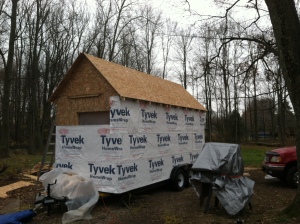 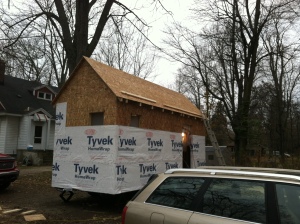 Amidst all this building (less than I hoped for) I’ve been working (as in, real job like working) for some crazy reason (guilt? obligation?), which was stressful enough, but I also had to deal with the heartbreaking loss of my Audi station wagon… <sob> (Sport Wagon! It’s a Sport Wagon!) It’s been on it’s way out for as long as I’ve owned it, but after sitting around in the weather and being neglected for almost three years(!) it wasn’t up to snuff when I went back to it. The transmission was still continuously stuck in third gear most of the time (which, by the way, is not a reason to not take it on a giant road trip through the White Mountains in the middle of winter! That car caused, and got me out of, a shit-ton of awesome snowy, death-defying adventures in the wilderness. Audi rocks! Even in third gear!). Then the exhaust system fell apart (ask any of my neighbors, or anyone within ten miles of me), and then to top it off: the first time I had to park in a ramp downtown in…twenty years…someone sideswiped my car from front to back, tore down my side view mirror and left brutal black scars all the way from bumper to tailgate. (Don’t park in a ramp!) 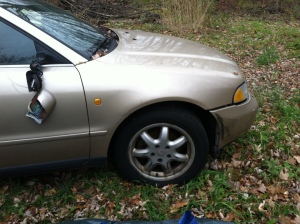 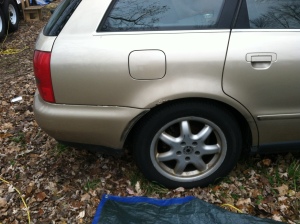 So, I was pushed to finally buckle down, get screwed over by a used car salesman and buy a truck to pull my house.

I frickin’ love this truck!! I can swing in and get lumber at will, I can carry anything I want anywhere I want, and I get about 14 miles to the gallon (ok, that really sucks). 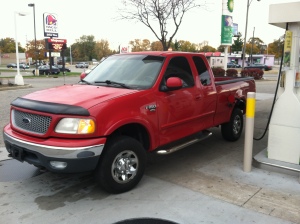 Friggin’ roofs. Hate ’em. But getting close (Again, end of October/beginning of November). Worried about creep, I decided to put in a structural/decorative feature in the middle of the living room. I put some extra rafters with cedar beams between them in the ‘big’ gap in the living room, so there will be less chance of my house falling apart. I’ll use them to hang my ceiling fan, ceiling light, ceiling cat. whatever I want to hang from the ceiling….

But my rafters are in and up! Gonna try to put the plywood up tomorrow! 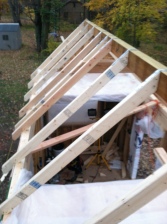 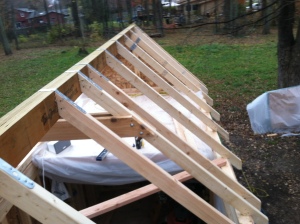 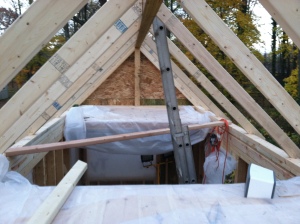 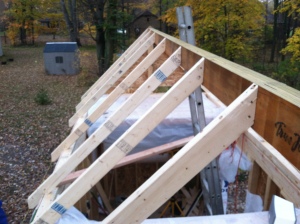 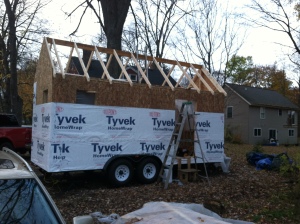 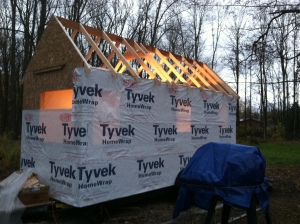 Hurricane ties are big and important… 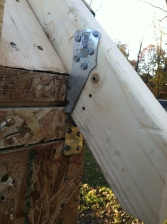 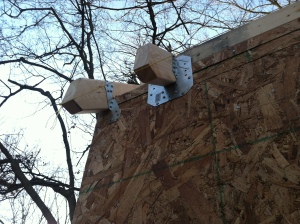 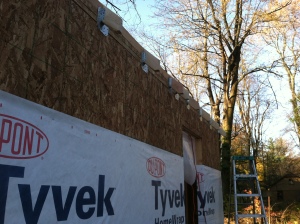 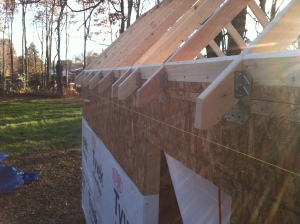 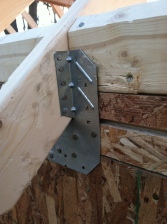 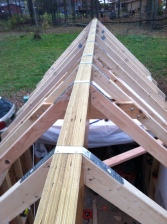 Oh, and here’s a pretty cool picture I snagged off the webcam the night I finished the rafters:

…getting stronger. (This all actually happened at the end of October…) I ordered two giant 20 foot long pieces of LVL for my ridge beam. If you don’t know what LVL is, it’s laminated veneer lumber that makes for ultimate bad-assedness.  They are super strong compared to ‘regular wood’, and much less prone to bowing under weight, and allow me much more headroom in my lofts (and they’re incredibly tough on nails). But turns out they are really hard to find in the size I wanted. I went to tens of hardware stores and they kept telling me to get 2X8s or 2X12s cuz they are cheaper. I don’t care about cheaper! I want headroom, dammit! I finally called Lowe’s on a whim, and they could get them! So, again ‘Depending on the Kindness of (not) Strangers”, I roped Val into driving these behemoths back to the site with her family truckster/mini-van. The office workers at the lumber yard spent some time giggling at me for my choice of transport when I picked them up, but the joke was on them (though they won’t ever know it). I forgot to take pictures, but we were successful in slowly steering these suckers home, front of the boards on the dashboard, backs almost dragging on the pavement. But we got them back alive, and then we went back to get my car and drank at Perrin Brewery for the rest of the day  (Life sucks…)

Turns out there are special screws you can get (only at Menards’s) that are built just for screwing two LVLs together. TrussLok… Money… When my house gets carried away by hurricane Wicked Witch of the West, that ridge beam will be the only thing left behind. 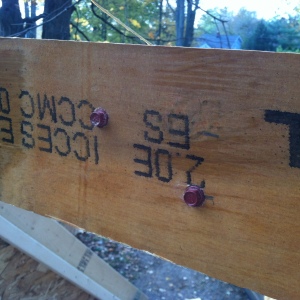 My normally able assistant (Melissa) was sick as a dog, but she was able to risk her life with me to get the beam up onto the lofts, using ropes and ladders (sounds like a kid’s board game) and sheer will power.

The next day I used the aforementioned tools and skills (minus my unable assistant), as well as my sweet pulley (worth every cent) and more rope to rastle that bitch into position and nail her down. 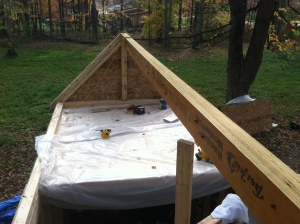 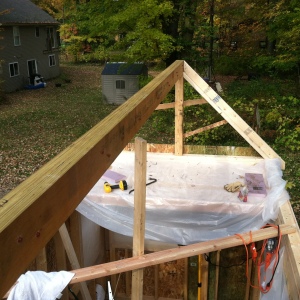 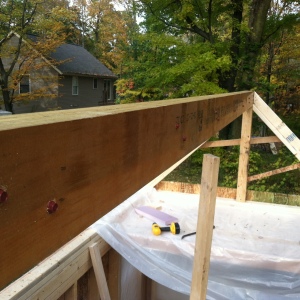 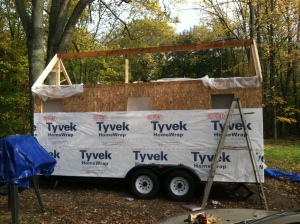 I actually do have some progress to report, but I can’t pull it together right now. Just deal with this…

My latest addiction to end all addictions…

The Addiction Before the Last Addiction 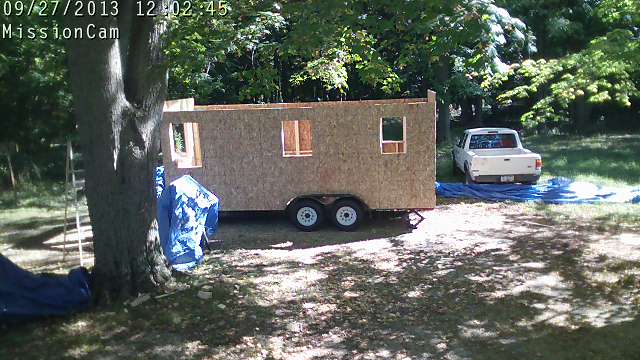